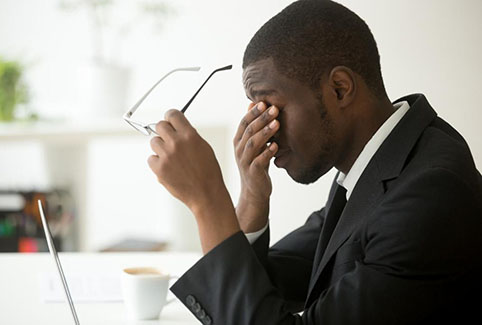 Our understanding about concussion fatigue is still developing.  This is because our knowledge of what causes Concussion and Post-concussion Syndrome (PCS) and how it should be best treated continues to evolve. Many things may be causing a concussed person’s fatigue including: increased mental effort, sleep disturbances, anxiety/depression, hypothyroidism, etc. Proposed treatments include: cardiorespiratory exercise, mindfulness-based stress reduction, bright light therapy, and medication. While these treatments will likely help, the bottom line is that Concussion and PCS fatigue is still relatively poorly understood, and there are no gold standard treatments for it yet.

Concussion Fatigue – Causes
Concussion fatigue is arguably one of the most debilitating & resistant to treatment symptom. It has been defined by one group as: “the awareness of a decreased capacity for physical and/or mental activity due to the imbalance in the availability, utilization, and/or restoration of resources needed to perform activity.”1

Van Zomeren & Broumer have a hypothesis for the origins of mental fatigue called the “Coping Hypothesis.”2 It proposes that fatigue arises in various brain conditions because their associated cognitive deficits make activities more mentally taxing. In other words, for a patient with a Traumatic brain Injury (TBI) to do a given task, they will need to expend more mental effort to accomplish the same amount activity than they did before the TBI. One study looking at this compared the association between vigilance and subjective/objective levels of fatigue. Vigilance was measured with a standardized 45 minute task; subjective fatigue by the Visual Analogue Scale for Fatigue (VAS-F); objective fatigue was measured by increases in blood pressure.3 The results of the study supported the Coping Hypothesis: compared to controls, TBI patients expended more effort to maintain their performance & reported a higher subjective sense of fatigue. In addition, the authors propose that this increased effort may stress the individual, leading in turn to the greater depression and anxiety observed in TBI.

However, increased effort is not the only potential source of fatigue. Other studies have noted greater incidence of sleep disturbances (e.g. decreased onset of sleep, decreased sleep efficiency, increased time spent awake after initially falling asleep and more slow-wave sleep).4 These results were true even after controlling for depression and fatigue. This means that, while depression and anxiety can worsen the fatigue issue, they cannot fully explain it in concussions (mTBI) and TBI patients. With varying degrees of evidence, other fatigue mechanisms have been proposed including: hypothyroidism, injuries to the reticular activating system, limbic system and the basal ganglia. In reality, fatigue in concussions is likely caused by many factors that at times overlap and compound one another.

It can be categorized in a number of ways:2

Fatigue can also be categorized as

Outcome Measures for Fatigue
There are a number of outcomes measures for fatigue. Each seems to measure different aspects of the issue and therefore have different uses and limitations. These include:

Treatments for Fatigue
There are some non-pharmacological treatments that have a role to play including:

There are a number of medications showing promise as fatigue relievers including: Methylphenidate and OSU6162.7 Other medications target improving sleep quality, for example prolonged-release melatonin (Circadin).2 The patient needs to consult their GP, who may in turn want to refer them on to an appropriate specialist like a psychiatrist or an MD specializing in sleep assessment and treatment.

One caution is that many of the studies cited were investigating TBI, rather than specifically concussions (mTBI). However one group found no significant association with severity of TBI injury and the levels of fatigue reported.2

Paul received his B.Sc. (PT) with honours in 1998 from the University of Toronto. He is a registered Physiotherapist with the College of Physiotherapists of Ontario. Paul Godlewski practices as a consultant physiotherapist at three separate locations across Toronto: East Toronto – East Toronto Orthopaedic & Sports Injury Clinic Downtown Toronto – Athletic Edge Sports Medicine West Toronto – Trilogy Physiotherapy To deliver the best care, he collaborates with sports physicians, a neurosurgeon, a psychologist, other PTs and RMTs. Paul Godlewski also works closely with many out-of-house specialists including: otolaryngologists, Neuro-Optometrists, Speech Language Pathologists, Occupational Therapists and Cognitive Behavioral Therapists.